The Globe and Mail published a story today (Friday) chronicling neighbourhoods where home prices have gained the most in Canada’s major cities.   Kelowna house values didn’t make this list because we’re not part of one of the four largest Canadian cities but it made me wonder where we would rank and if we would even make the list.  Spoiler alert¦..we wouldn’t.

Average price gains from July 2009 to July 2014 were randomly selected.  Just because. Perhaps median price gains would better reflect true growth in communities like ours where lakefront homes are significantly higher than a typical middle class family home but let’s not get picky and just go with it.

As a former Montrealer, let’s start there.  Montreal showed the weakest growth of the four with an 18% increase overall in five years with communities like Westmount, Verdun and St. Laurant recording increases of 69%. Overall, Toronto house prices increase 43% in all areas since 2009 with Willowdale, Agincourt and Newtonbrook leading the way with prices 75% higher.  When did Agincourt become sought after? Globe and Mail Neighbourhoods where home prices gained the most 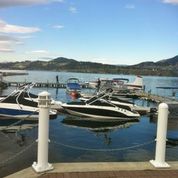 Our super cool little community with a 90 mile lake running through it with directions given by pointing out where to turn with landmarks like golf courses and wineries saw the average price increase by 16% over the same period. My first thought is how can we be trailing Montreal?  Vancouver real estate prices have always defied logic so we can generally shrug off those numbers because they really don’t make sense to anyone.  August’s average price was $984,000 (not a typo) in Vancouver which means before you hit your next birthday this number will likely be 7 digits.

The lesson to take from this is if you’re a Kelowna buyer waiting on the sidelines wondering when the time will be just right¦.. right now is the right time.  Long term, short term, medium term prices look like they aren’t going down and could have risen a lot more especially compared to other places in the country.

Make your move before the Kelowna Housing Prices go up. Call me for my top 5 picks in each area.